In case you missed it, a new constitutional doctrine seems to be developing in Alberta. To wit: the idea that creating business uncertainty violates Section 121 of the Constitution Act, 1867, which governs interprovincial trade.

Section 121 of what was known until 1982 as the British North America Act is pretty unequivocal on the topic of interprovincial trade. It says: “All Articles of the Growth, Produce, or Manufacture of any one of the Provinces shall, from and after the Union, be admitted free into each of the other Provinces.”

This is why B.C.’s argument it can regulate the flow of bitumen through that province appears on its face to be a weak one – if the fight ever gets to a point it can actually be tested in a court of law, that is.

Mind you, in 1867 the environment wasn’t really on the front burner among the fellows we used to call the Fathers of Confederation – every one of them having at least one of the necessary qualifications for fatherhood. So the B.C. case may not be quite as weak as it is being unanimously made to seem in Alberta these days.

At any rate, arguments now being advanced with one voice by Alberta’s NDP Government, its Conservative Opposition, and its mainstream media chorus seem to go well beyond mere unimpeded admission from one province to another of articles of growth, produce or manufacture – a definition that unquestionably includes Alberta’s diluted bitumen.

Premier Notley in her newly revealed tougher-than-Peter-Lougheed, way-tougher-than-Jason-Kenney, mode certainly seems to be making this argument about B.C. NDP Premier John Horgan’s talk of restricting the amount of diluted bitumen that can pass through his province. Repeatedly calling B.C. opposition to Kinder Morgan Inc.’s Trans Mountain Pipeline expansion project unconstitutional, she argued recently “this kind of uncertainty is bad for investors. Enough is enough. We need to get these things built.”

This is being used to justify the official Alberta boycott of B.C. wine, and to argue for other, more punishing, trade sanctions against British Columbia.

It seems to me, though, that pipeline proponents including Ms. Notley are now starting to connect these dots in a way that comes close to arguing that creating uncertainty itself is therefore an unconstitutional restraint of interprovincial trade.

Indeed, beyond Ms. Notley’s stream of Tweets and comments to this effect, there seems to be an elite consensus about this in Alberta, if not quite a complete consensus.

The problem with this argument, of course, is that beyond a general statement of intentions, Mr. Horgan doesn’t seem to have actually put forward any actual policy to call unconstitutional. Indeed, in yesterday’s B.C. Speech from the Throne, there was little indication of what Mr. Horgan’s government intended to do beyond an anodyne statement it “is considering new protections that would improve our ability to prepare for, and respond to, bitumen spills.”

Um… That was it. Could this indicate Premier Horgan doesn’t really have a plan? Or does it just mean he’s being cagey, hoping to create enough uncertainty for the Texas-based corporation to reconsider its pipeline plans, which it has threatened to do.

Either way, yes, uncertainty has been created. Calls for protests to stop the pipeline by environmental activists in B.C. have the same effect. But so what? Isn’t the wonderful capitalist market supposed to be by its nature uncertain?

Does this mean a B.C. citizen exercising her right to advocate a halt to pipeline projects is unconstitutionally violating Section 121? 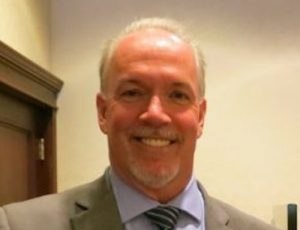 And if so, what’s next? A prohibition on free expression for the greater good, as defined in the corporate boardrooms of Calgary? Or is free speech OK, as long as it can be guaranteed it won’t have any actual impact on the corporate sector’s wishes?

The whole business confidence argument, by the way, is well understood among economists to be mainly a tool for intimidating governments and opponents of corporate projects. The “Zombie Confidence Fairy,” as Nobel Prize winning economist Paul Krugman termed the notion that business confidence is undermined by uncertainty is so widely repeated it has taken on the air of unassailable truth. Just the same, as Dr. Krugman says, “it’s actually a highly dubious, mathematically implausible argument that receives no support at all from the data.”

Or maybe, as some environmentalists claim, the fossil fuel industry really is so fragile that it just needs to be stalled a while to be stopped forever.

If so, that’s not very good news for Alberta, with its one-note fossil fuel economy, is it?

On the political front, though, Premier Notley seems to be having a great week with this strategy. As Calgary Herald political columnist Don Braid observed in a rant about Mr. Horgan, Ms. Notley “has reshaped her image radically in the past 10 days. She’s gone from patient conciliator to fiery defender of Alberta, in the winning tradition of premiers stretching back to Social Credit and the Progressive Conservatives.”

This happened just as Opposition Leader Jason Kenney was apparently trying to recast himself in the mould of former Saskatchewan premier Brad Wall as the Mr. Congeniality of Alberta politics, which is ironic considering his history.

Well, he seems to have a plan now. At Preston Manning’s conservative bun-fest in Ottawa last weekend, the UCP Leader promised to “restore investor confidence” and take on abortion rights and gender-neutral toilets. It wasn’t clear from the article on a right-wing website whether he sees the two activities as connected.

He’s no bot, but Russia’s social media and press guy in Canada manages to stir up controversy just the same

On Milton Acorn, on his birthday, Canada’s People’s Poet

Rachel Notley to Alberta’s trade ‘envoy’ to Washington: Nice seeing you ’round! Here’s your hat!

23 Comments to: Is just talking about restricting diluted bitumen in pipelines an unconstitutional impediment to trade?