Thanks to solid reporting by the St. Albert Gazette, the unnamed city council members whose statements or actions were criticized as “foolish and/or reckless in a particular moment and which might be deemed as ‘improper’ or ‘irregular’” in the municipal inspection report by consultant George Cuff have now all been identified.

The councillors whose actions were highlighted as improper but who were not named in Mr. Cuff’s report released Tuesday are Sheena Hughes, Cam MacKay and Bob Russell, the Gazette reported in yesterday’s edition. The Cuff Report also singled out Mayor Nolan Crouse for criticism by name.

Specifically, because of the Freedom of Information request filed by the Gazette, we now know it was Mr. MacKay who on Oct. 29, 2015, accused city administration officials and other councillors of supporting a “culture of dishonesty,” and it was Ms. Hughes who in January 2014 “referred in very disparaging language to colleagues on council in front of a local school audience of Grade 6 children and staff.”

The event involving Ms. Hughes, said Mr. Cuff in his report, “set an early and negative tone and reduced the opportunity to build any sense of team cohesion.”

As reported last week in this space, an Aug. 27, 2016, report by the Gazette showed the identities of the councillors responsible for four other incidents in 2015 and 2016 to be Mr. MacKay in one case and Mr. Russell in three.

This is a highly significant development for St. Albertans planning to vote in the Oct. 16 municipal election because it makes it very difficult for supporters of the Hughes, MacKay and Russell campaigns to convincingly make a case the widely the perceived “dysfunction” on our current city council is the result of improper or irregular actions by all council members.

It seems very likely from the approach favoured by Mr. Cuff that if he could have found actions or statements egregious enough to highlight that had been made by Councillors Wes Brodhead, Cathy Heron or Tim Osborne, he would have included them in his report. The fact he did not strongly suggests no examples of improper behaviour by any of them could be found.

For this reason, it was highly inappropriate of Mr. Cuff not to name the guilty parties in his report, because this tended to smear Ms. Heron, who is running for mayor, Mr. Brodhead, who is seeking reelection, and Mr. Osborne, who is not, as being part of the problem when the full facts make it clear they are not. 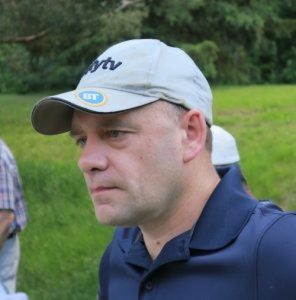 Rather, it is likely the dysfunction on council has originated with the group Mr. Cuff said has operated since the 2013 election with a “notion of official opposition” to most policies pursued by Mayor Crouse – that is, Councillors Hughes and MacKay, and later Russell, who was elected in a by-election in 2015.

Policy opposition, of course, is legitimate in a democratic system. The issue is the tactics used and the tone adopted.

Unsurprisingly, supporters of the Hughes, MacKay and Russell campaigns responded on social media and in comments under the story yesterday by attacking the newspaper as “biased” and its reporting, which speaks for itself, as “a hit job” and “pretend news.” One prominent supporter also defended all the acts and statements reported on as entirely appropriate.

When Mr. Cuff presented his report to the public in St. Albert’s council chamber on Tuesday, Mayor Crouse, who had been criticized in the report for his demands for detail and inability to get this council to work together, as well as making “a genuine error in judgment” that resulted in his voting in violation of the Municipal Government Act, apologized profusely.

None of Councillors Hughes, MacKay or Russell apologized or acknowledged at that meeting that they were responsible for the list of statements or actions that were highlighted in the report by Mr. Cuff as inappropriate or improper.

Yesterday’s St. Albert Gazette’s story dealt at length with an incident in which Councillor Sheena Hughes used “very disparaging language” about her colleagues on city council during a December 2013 public appearance before a Grade 6 class and teachers at Muriel Martin Elementary School.

In a letter to Ms. Hughes on Jan. 10, 2014, “the principal said he found Hughes’ comments to be ‘not appropriate and seemed to be directed to your fellow council members,’” wrote reporter Jennifer Henderson.

According to the letter that was the subject of the Gazette’s FOIP request: “One student asked if you needed a university degree to be in politics and you replied, in obvious reference to the other councillors, ‘No, you can be as dumb as a sack of hammers and still get in!’”

Principal Les Kirchner also said in the letter that Ms. Hughes told students she ran for council because she was “bullied by our council four years ago” – although the story and presumably the letter do not reveal whom Ms. Hughes perceived to be bullying her, or the nature of her claim.

Ms. Hughes explained the incident to the Gazette as the outcome of inexperience. “The entire time I have been on term I have strived to try to do better – whether it’s through my communication or interpersonal or understanding how the government process works – I have continually tried to do better,” she told the reporter.

Nevertheless, the impact of the incident has lingered. In December 2015, upon learning Ms. Hughes was scheduled to visit two Grade 6 classes at the school, a teacher requested another councillor be assigned to meet the children.

Ms. Hughes may have improved her attitude, the teacher wrote in an email seen by AlbertaPolitics.ca, but based on her comments in media and at council meetings since the December 2013 incident, “we would request a different council member.”

“We would much rather have a council member that was able to show the positive aspects of city council and how the needs of a city are managed by a team that works together,” the teacher wrote.

Sic transit gloria mundi … Globe and Mail, a ‘writers’ newspaper’ no more or a national one either, cans two great columnists

Celebrating a different kind of Labour Day in Alberta – one with something to celebrate!

Carbon taxes are the Obamacare of Canada: invented, then cynically abandoned, by the right

China’s concerns about Canadian canola are legitimate, and we’re going to have to deal with them sooner or later

Can Kenney’s plans for Albertans’ pensions survive the next round of bad AIMCo news?

Alison Redford is back, relaxed and ready to rumble with anyone who blames her for her former party’s problems

One Comment to: MacKay, Hughes and Russell ID’d as St. Albert city council members who made statements criticized by Cuff Report