Home / Alberta Politics / Time for a changeup? UCP Caucus’s money troubles are funny and ironic, but not enough to win an election for the NDP

PHOTOS: NDP Health Minister Sarah Hoffman. Is she the best person to hold Alberta’s finance portfolio as Alberta’s 2019 election edges nearer? Below: Finance Minister Joe Ceci and Jason Kenney, the conservative politician most likely to lead the United Conservative Party into the next provincial election.

The pecuniary difficulties faced by the new United Conservative Party Caucus in the Alberta Legislature are genuinely hilarious and highly ironic.

The irony is particularly pronounced given the pro forma screeches of anguish from the caucus after the province’s first-quarter financial results were released Wednesday by NDP Finance Minister Joe Ceci.

The now-combined Wildrose-Progressive Conservative caucus had been officially united for only two days more than a month when it became apparent it had wildly overspent its publicly financed Legislature budget. The caucus discovered, apparently to the astonishment of its spendthrift members, that it is facing a $337,000 deficit. Political flunkies will have to be laid off – or, at least, moved to a donation-supported employer well away from the public trough.

This hardly conforms to the carefully cultivated image of pro-austerity conservative parties like the UCP as fiscally prudent, businesslike and highly responsible with the taxpayer’s hard-earned dollars.

Of course, anyone who has actually observed conservative politicians in action anywhere, especially their propensity for burning through public funds while slashing taxes for their wealthy benefactors, knows this image is entirely spin.

The fact the 28-member Opposition UCP Caucus has 38 publicly paid political staffers, compared to 25 for all 55 NDP MLAs, is a striking illustration of this phenomenon in action. Most of the UCP Caucus’s financial troubles, the Edmonton Journal’s capable legislative reporter wrote on Thursday, originated in the Wildrose Caucus before the two parties’ members voted to merge. Again, not surprising.

Readers, however, need to remember that as far as the usual suspects in the conservative media cheerleading squad are concerned, conservative deficits don’t matter. Only Liberal and NDP deficits are cause for frantic concern.

Still, anyone amused by this juxtaposing also needs to keep in mind that the obvious inability of conservatives to manage their own publicly supported budgets in no way reduces the ability of their patrons in the wealthiest segments of Alberta society to raise formidable amounts of cash for their political party, as well as for the so-called PACs set up to help the UCP skirt Alberta’s election financing laws. 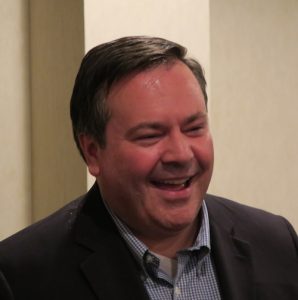 Nor should it lead us to the conclusion that the economic situation faced by Alberta – and in particular the budgetary effects of the significant revenue shortage faced by the province as the prices of commodities on which our provincial economy depends remain stubbornly low – can simply be skated past by the NDP.

In a few weeks, the financial troubles of the UCP Caucus will have been conveniently forgotten and the financial predicament faced by the province will continue to loom large in the minds of a great many Albertans, and especially in the vast and well-financed UCP propaganda apparatus.

In the medium term, in other words, the irony of UCP fecklessness will not save Premier Rachel Notley’s NDP Government from the very real political danger presented by the continuing state of the province’s finances.

In the first-quarter fiscal update – required by a law dating back to the heyday of high petroleum revenues and officially sanctioned conservative ideology in Alberta – Mr. Ceci was forced to revise his officials’ estimate of the price of oil downward, with the inevitable impact on the province’s forecast bottom line.

So while the NDP made progress on reining in costs while maintaining public services – what nowadays is known as bending the cost curve – the predicted budget deficit for the end of the year remains stubbornly stuck at $10.5 billion, and surely the NDP would have liked to see that number edge into the single digits.

To many Alberta voters, including a lot who support the NDP on most issues, this doesn’t make it sound as if the Notley Government has much of a plan to deal with the problem. Mr. Ceci’s homespun delivery may add to this impression.

Nor is the NDP prepared to deny that budget deficits and debt of the magnitudes faced by Alberta even are a problem – an argument for which a sound case could be made by any competent economist, but which has been deemed politically unsalable in Alberta.

For all intents and purposes, then, the NDP appears to accept the argument of the conservative establishment that any deficit is a terrible thing, all budgets need to be hurriedly balanced and all debt must be eliminated – most of which is plainly nonsense.

It could be argued the only significant difference between the NDP and the UCP on this point is the speed at which this feat should be accomplished – understandable enough since the NDP actually has the responsibility of running the place without demolishing it.

It’s troubling, of course, to contemplate the possibility the UCP seriously proposes to cut spending by $10 billion or even more while slashing taxes across the board. It’s unlikely our health care system alone could survive that onslaught, UCP fantasies (or outright lies) about not touching “front line” health care workers notwithstanding.

And yet the NDP and Mr. Ceci also seem unprepared to confront the obvious reality that if Alberta proposes to function with a level of public services plainly expected by citizens – regardless of how they vote – it has to do something to raise suitable revenues.

In other words, our revenue problem is both more serious and more tractable than our spending problem. And the obvious solution – again, deemed to be politically impossible apparently by everyone – is the implementation of a sales tax like every other province in Canada.

But rolled out skillfully, because most Albertans are not fools, a sales tax might be more saleable than either major party imagines – especially in light of the alternatives.

Regardless, in terms of the political optics as we move toward a provincial election in 2019, it is said here the NDP needs to show some resolve, even if it is unwilling to actually demonstrate it where it’s really needed and would really help – that is, on the revenue side of the budget.

One way to do that would be a visible change in the finance portfolio, in which the soft-spoken Mr. Ceci has done a good job but, arguably, sent a weak message.

Sarah Hoffman, the minister of health, has been the most effective member of Premier Rachel Notley’s cabinet.

Historically, the health ministry has been a career killer for many politicians, whose political carcasses litter the neighbourhoods of more than one Canadian legislature.

But the capable Ms. Hoffman has not only survived, she has prospered.

Jason Kenney, the former Harper Government cabinet minister, Progressive Conservative leader and the front-running candidate to lead the UCP is a hardworking and calculating politician, who, though he is not a particularly likeable or empathetic man, is capable of doing the electoral math.

Accordingly, the NDP can count on it, as 2019 nears, Mr. Kenney will play to his strengths, and not the NDP’s. And one of his strengths right now – notwithstanding the embarrassment of the bottom line of the UCP Caucus, of which Mr. Kenney is conveniently not yet a member, is the public’s perception of the province’s financial bottom line.

Which is why it is time for a change of course on finances, and why Ms. Hoffman seems like the woman to lead it.

What does climate change mean for Alberta’s growing dependence on a pipeline to U.S. Gulf Coast refineries?

Merry Christmas to all! Santa is bringing presents for everyone this holiday, regardless of political orientation

24 Comments to: Time for a changeup? UCP Caucus’s money troubles are funny and ironic, but not enough to win an election for the NDP