Is it just me, or is it mildly surprising that Jason Kenney turned down k.d. lang’s offer of free tickets to Calgary Pride on Sept. 3 and 4?

Mr. Kenney, of course, is the former Ottawa insider, Harper Government cabinet minister and Alberta Progressive Conservative leader who is now the front-running candidate to lead Alberta’s United Conservative Party. He is working hard to persuade Alberta’s right that he’s a real conservative, just like them. He drives a huge Dodge Ram pickup truck, Tory blue, to help make this point. He is also known to be, shall we say, weak on LGBTQ issues.

Ms. lang is the internationally renowned chanteuse, so famous she requires neither capital letters nor further introduction, who Tweeted earlier this week that, “I’ll give @jkenney free tickets if he’ll sit down and talk #lgbtqia rights with me!”

Ms. lang’s invite appears to have been made in response to a snotty response to criticism by Kenney spokesthingy Blaise Boehmer stating that the candidate hadn’t been invited to Calgary Pride, but had lots of invitations elsewhere, so he’ll therefore be RSVP’ing one or two of them, thank you very much.

But if he wanted to demonstrate that he’s a real Tory, wouldn’t the thing for Mr. Kenney to have done been to have taken the tickets … and resold them on StubHub?

OK, mean Derek Fildebrandt jokes aside, given his recent record on topics that matter to the LGBTQ community, which does get out to vote, Mr. Kenney is unlikely to be anxious to discuss his past comments on that subject with anyone in public, particularly a high profile and newsworthy member of the community like Ms. lang.

But the tone of Mr. Kenney’s response – or that of his frequently acerbic mouthpiece, at any rate – is not going to win him a lot of friends, and I’m not just talking about within the LGBTQ community. And the folks he does impress may not be the friends an aspiring provincial leader really wants to be associated with in today’s Alberta.

I know the prevailing wisdom is that Mr. Kenney is just playing to the Peanut Gallery in the conservative base and will change his tune later as required.

Additional conventional wisdom is that the NDP is so unpopular with Albertans that any conservative leader will beat them in 2019, or whenever the next general election is held. 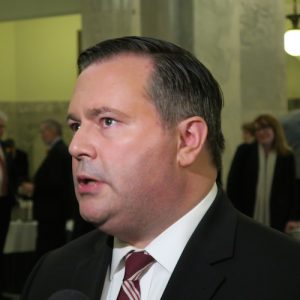 I’m here to tell you that we’ve heard this song before, learned all the words and sung along – and things still didn’t turn out the way they were supposed to, according to the pundits.

Remember Jim Prentice, the Tory saviour from Ottawa who was going to ride into Alberta in 2014, wow the locals and make the province safe for another 44 years of Progressive Conservatism?

Mr. Prentice had his strengths. He was a smart, decent man. He’d successfully played challenging supporting roles in both politics and big business. His inclinations were inclusive. Still, when you got right down to it, he wasn’t really all that likeable.

Mr. Prentice was certainly no Ralph Klein, the proverbial politician you might not agree with, but figure you’d enjoy having a beer with just the same. And he turned out to be no Rachel Notley either.

Whether or not Mr. Kenney’s all that smart, this latest Conservative saviour from Ottawa doesn’t really seem like what you’d call a decent guy, has never actually had a real job outside politics and Astro-Turfing, and sure as heck isn’t very inclusive. Perhaps more important, though, he’s far lower on the Likability Scale than Mr. Prentice ever was.

I mean, seriously, can you imagine anybody wanting to have a beer with Jason Kenney?

But Mr. Kenney is just the latest in a long list of front-running conservative candidates in Alberta – all advised by pretty much the same group of Conservative Party insiders and strategists – who don’t seem as likeable as their chief competitors for the job they’re looking for.

There was Jim Dinning, who turned out to be less likeable than Ed Stelmach.

There was Barb Higgins, who turned out to be less likeable than Naheed Nenshi, who is still mayor of Calgary.

There was Gary Mar, who turned out to be less likeable than Alison Redford – or so it seemed to most Albertans until they changed their minds, or Ms. Redford managed to change their minds for them.

There was Joan Crockatt – an incumbent Tory MP in Calgary, talk about having all the advantages! – who turned out to be far less likeable than Kent Hehr and afterward blamed her unlikely loss to the likeable Liberal on … foreign money! Please!

And there was, famously, Mr. Prentice, who turned out to be considerably less likeable than Rachel Notley, who is now the NDP premier of Alberta.

Yeah, I know, leadership isn’t just about likeability. But it’s interesting to note just the same that the strategy of the Conservative insider brain trust that backed all these candidates has essentially never changed. And that is – can’t we all agree? – the traditional popular definition of insanity.

Now we have the not-very-likeable Mr. Kenney with the insider track to knock off the somewhat-more-likeable Brian Jean, the former Wildrose leader and the main competitor to lead the UCP, for the right to do battle with the immensely likeable Ms. Notley.

If you ask me, this sounds like the Tories are about to buy into Jim Dinning 6.0, the application that’s never worked properly since they got tired of Mr. Klein.

Mr. Kenney, obviously, doesn’t think he needs to be smart. But if he were smart, I’m telling you, he’d ignore his advisors and take Ms. lang up on her generous invitation … and he’d show up.

I’ll bet it’s not even too late.

Hard to believe it’s been 6 years: Looking back to 2011, and Election Eve 2008, with happy memories of Layton, Jack

Time for a changeup? UCP Caucus’s money troubles are funny and ironic, but not enough to win an election for the NDP

Kinney versus Kenney: Can a progressive gadfly offer unhappy Albertans a way to send their premier a message?