Home / Alberta Politics / Hard to believe it’s been 6 years: Looking back to 2011, and Election Eve 2008, with happy memories of Layton, Jack

PHOTOS: NDP Leader Jack Layton, looking fragile and using a crutch, in Edmonton in April 2011. Below: Mr. Layton that day, again, and some of the mourners in front of the Alberta Legislature on Aug. 24, 2011.

As happens each year at this time, I’m rendered almost speechless by the loss of Jack Layton, six years ago yesterday. The piece below, with my own fond memory of Mr. Layton, was published on this date in 2011, just hours after we had heard the terrible news. DJC

It’s OK to mourn the loss of Jack Layton, of course, Joe Hill’s wise strategic counsel to social activists notwithstanding.

It’s also OK to take a moment to mourn before we start to talk about the implications for the Canadian New Democratic Party of the death of Mr. Layton, which are very grave and must not be brushed away with glib optimism as I am sure many of us are tempted to do at a moment like this.

Canada’s New Democratic Party leader was beloved by many of us and respected by many more. His loss at the age of 61, still in the prime of his political life, comes as a profound shock, even to those of us who feared the worst after his news conference less than a month ago, at which he announced he was stepping down as leader of the Opposition to battle a new onslaught of cancer.

For those of us who have heard Mr. Layton speak, let alone who have met and talked with him, it is very hard to comprehend that someone so full of life could be alive no more.

On the theory that the best mourning is done by retelling happy tales that illustrate the character of our departed comrade, let me tell you about my peculiar relationship with Mr. Layton, the only leader of a national or provincial political party ever to have picked up the telephone and made a cold call to me, to ask me for an unusual favour, no less. 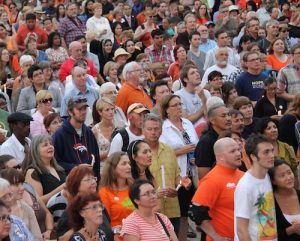 Actually, this is a bit of a fib. He had a political aide call first, to make sure I’d be waiting by my telephone when he phoned. But the aide, a very polite young person whose name, I’m afraid, escapes me at this moment, refused to reveal the topic of the upcoming call.

This happened back in 2008, and to tell you the truth, with a federal election looming, I thought Mr. Layton might be about to ask me to be a candidate in one of those Alberta ridings that was and is as lost a cause for the NDP as, say, a rural riding in Quebec…

In the event, however, Sunny Jack astounded me with another request entirely. Would I consider becoming, he asked, the poet laureate of the NDP?

Well, maybe the word laureate never left his lips, but without a doubt the phrase poet of the NDP was uttered more than once.

This turned out to be the brainchild of a mischievous Toronto business journalist and teacher named Kimberly Noble, a former colleague of mine at the Globe and Mail’s Report on Business who apparently had Mr. Layton’s ear on certain matters. It seems she had persuaded him of the potential political uses of light verse on current topics and given him the idea I was just the guy to dash off such stuff on demand.

Of course I said yes, although I’m sorry to report that nothing much came of this cheerful scheme. Presumably cooler heads prevailed in the busy months leading up to the great achievement of May 2011.

On the other hand, Mr. Layton consistently responded, politely and swiftly, when I misused his private Parliamentary email address and sent him questions for the enlightenment of this blog’s readers, so all was not for naught.

Now, at a moment when New Democrats really need a poet laureate, we are all struck dumb. So let’s look back to Election Eve, 2008, and to a happy plea that came true to a remarkable degree in 2011.

But what will we do now? That, of course, is a question for a few hours hence…

We’ve heard the pitches, promised goals
Put forth by Tories and by Libs.
Why are they sinking in the polls?
Perhaps because they’re mostly fibs!
Now that they know they can’t relate
Because their plans, revealed, are seen
To be a failure in debate,
They hope to get us voting Green,
It’s their last chance, the only way
To beat the surging NDP
And save their butts on Voting Day.
We hope that all Canadians see:
To get the country back on track
It’s time to vote for Layton, Jack!

Breakup on the right? Naw, Canadian conservative politicians’ long romance with the Rebel isn’t over

CLAC’s big role in the Trans Mountain expansion: Another political pipeline problem in the making?

2 Comments to: Hard to believe it’s been 6 years: Looking back to 2011, and Election Eve 2008, with happy memories of Layton, Jack