PHOTOS: The race is on and it looks like … “a dangerous leader.” (Old horseracing print with that title found on the Internet, artist unknown.) Below: Would-be United Conservative Party leaders Brian Jean, Jason Kenney, Doug Schweitzer and Derek Fildebrandt.

Calling an effort to merge two large mammals into a single beast “a horserace” may not be a concept that comfortably bears much scrutiny, but horseracing metaphors are an irresistible temptation to political journalists.

Accordingly, with voting scheduled to commence this week, the campaign to unite the Wildrose and Progressive Conservative parties into a single United Conservative Party is inevitably now being described as entering the final stretch, the backstretch and the like – despite the fact the leaders of both parties are supporting the merger and a yes vote should therefore be a slam-dunk.

Voting by members of the Progressive Conservative Party, which until the election of Premier Rachel Notley’s NDP Government in May 2015 ruled Alberta for 44 years from a big, billowing, mostly moderate tent without having to work very hard to do so, begins tomorrow and runs through until Saturday.

With the party now under the leadership of Jason Kenney – an unrepentant paleo-social-conservative red baiter – apparently little need was seen to restrict the time allowed for voting. Indeed, the party even extended the time to register to vote. But why not? By now, most of the party’s progressively inclined members have been defenestrated by Mr. Kenney’s unpleasant supporters.

The Wildrosers – whose party was set up in the mid-Naughts during the PC premiership of the Ed Stelmach partly as a radical social conservative and market fundamentalist reaction to that premier’s moderately inclusive and progressive instincts – may be a potentially tougher nut to crack, even though Mr. Kenney is pretty clearly a Wildroser at heart. This may explain why potentially rebellious Wildrosers will be allowed to vote only on Saturday. 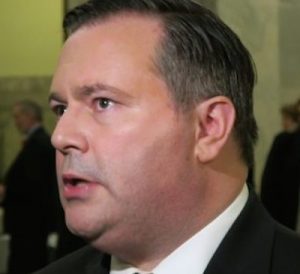 All this has resulted in the peculiar spectacle of Mr. Kenney and Mr. Jean – who are also the best known contenders to lead the “United Conservative Party,” as the still non-existent merged party is apparently to be called – each taking positions most often associated with the other’s party.

Mr. Kenney, as is well known, has staked out territory associated with the Alberta conservative movement’s most virulent base. In addition to his paleo social conservatism, as evidenced by his hostile views on gay-straight alliances in schools and longstanding opposition to women’s reproductive rights, he has taken to assailing critics who ask inconvenient questions as “communists.”

In other words, Mr. Kenney has already taken on the intolerant and hysterical colouration associated by so many Albertans with the Wildrose Party – which was one of the reasons voters turned to Ms. Notley’s New Democrats when they finally decided collectively in the spring of 2015 it was time to hand the long-in-the-tooth PCs their walking papers.

Mr. Jean has responded by seeming to channel Mr. Stelmach, which is unquestionably a surprising development. As reported in this space a week ago, he has started showing up in unexpected places like union barbecues and LBGTQ events. If you doubted it when you read it here, it’s now crystal clear that Mr. Jean’s strategy to avoid being crushed by the Kenney juggernaut is to try to paint himself as the sensible moderate candidate of the Alberta right, steering a course that hews much closer to the middle of the metaphorical road.

Speaking through the staccato medium of Postmedia’s Rick Bell, the Calgary political columnist previously known as “The Dinger,” Mr. Jean made this startling (for a Wildrose leader) statement: “Gone are the days when hard-right governments are going to be successful in Alberta.”

He insisted that, if he is premier, Albertans will feel “as little pain as possible” from any budget moves he makes. “We can’t be radical about it. We can’t go firing thousands of teachers and nurses. It’s just not acceptable.”

This may strain credulity a bit, given the Wildrose Party’s historical fanaticism about balancing budgets and some aspects of Mr. Jean’s own Parliamentary voting record as a Tory MP. Still, it is an effort to show a little light between his policies and those advocated by Mr. Kenney, and by Derek Fildebrandt, the Wildrose Party’s finance critic and another self-declared candidate to lead the UCP. I find it hard to believe, though, that this will be a winning leadership strategy with the Wildrose crowd and what’s left of the PCs.

Mr. Fildebrandt, founder of the Reagan-Goldwater Society at Carleton University during his student days in his native Ottawa, has set upon hard economic market fundamentalism, union bashing and commie baiting, without Mr. Kenney’s gay bashing and anti-abortion inclinations, as a strategy. In other words, Maxime Bernier with worse manners.

Unlike Mr. Jean and even Mr. Kenney, Mr. Fildebrandt explicitly and enthusiastically promises pain – presumably guessing that his supporters will relish the idea, as long as they think someone else is going to feel it.

There’s at least one other UCP leadership candidate, Calgary lawyer Doug Schweitzer, who once campaigned for Jim Prentice when he was running for the PC leadership. Once the new party actually exists, of course, more could come out of the woodwork.

However, if for some reason the unity vote by members of either party fails, expect a spell of absolute mayhem on the right, which has been predicting for two years that only by merging can they defeat the NDP.

If that sounds too much like a country song – “here comes Pride up the backstretch … and the winner loses all” – expect a completely new and different horserace narrative to be immediately introduced in that unlikely event.

Nobody can wreck an economy faster than an elected New Democrat, and that’s a Certified Kenney Fact!

Now for something completely different: The Climenhaga podcast, as transmitted by the sensational, sinister Minister Faust

12 Comments to: The race is on … unity voting starts tomorrow and UCP candidates are already at the clubhouse turn