PHOTOS: Participants in last year’s Edmonton Pride Parade as it made its way through the leafy streets of Rachel Notley’s Edmonton-Strathcona riding. They don’t look very dangerous, do they? Below: The missing men – Wildrose Leader Brian Jean and Progressive Conservative Leader Jason Kenney (Photo: Wildrose Party), plus Oscar Wilde and a participant in the Brooks Rodeo parade (Photo: Brooks Kinsmen Club).

Leastways, the Progressive Conservative leader’s feeble excuse for not attending the Edmonton Pride Parade on Saturday reminded me of something the Irish author and poet, the greatest wit of the 19th Century, famously said:

“I must decline your invitation owing to a subsequent engagement.”

For his part, Mr. Kenney, a noted social conservative who has aroused the ire of many in the LGBTQ community and its supporters with his suggestion students who join gay-straight alliances in schools should be outed to their parents, didn’t actually say anything himself in response to questions about whether he would be at Saturday’s Pride Parade.

According to the CBC, which followed up on the issue, his website said he would be attending the rodeo parade in Brooks, pop. 14,000, 190 kilometres southeast of Calgary on the road to Medicine Hat. We all know how important rodeo is, culturally speaking, to Alberta.

In case that doesn’t placate dissatisfied questioners, a PC spokesperson told the CBC Mr. Kenney will be attending a Vietnamese community event in Calgary on Saturday.

So that’s two subsequent engagements Mr. Kenney is booked to attend, which should pretty well cover the waterfront, as we used to say when I lived next to what Albertans and pipeliners nowadays call tidewater.

Meanwhile, readers may not be surprised to learn Wildrose Party Leader Brian Jean is also unable to attend, being booked for a fund-raising golf tournament in the bustling centre of Ponoka, pop. 7,000, south of Edmonton on Highway 2.

Both men are trying to appeal right now to the social conservative base of their own and each other’s parties in hopes of emerging as the leader of the still nonexistent entity tentatively known as the United Conservative Party, already rudely known as the You-See-Pee.

According to the CBC, spokespeople for both leaders said they’d really like to be there, but they missed the deadline to get into the parade – which was back in March, so they should be given credit for committing to tee-times and rodeos in with exemplary timeliness.

The Wildrose spokesperson quoted by the CBC said Mr. Jean’s party really wanted to get into the parade but didn’t get a letter from the organizing committee until after the entry deadline had passed. (Note to Mr. Jean’s office: We have telephones and email now in Edmonton.) 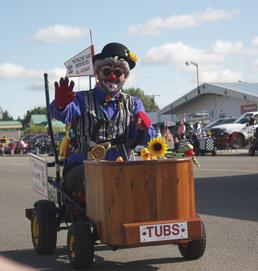 Well, any old float in a parade, as they don’t say, but probably could under the circumstances.

It is worth recalling that both Alison Redford, when she was Alberta’s PC premier, and Danielle Smith, when she was leader of the Opposition, went to the Edmonton Pride Parade without actually marching in it, but mingled cheerfully with the festive crowd at the end of the its route.

Both parties said they would send an MLA to watch the parade and smile shyly at passers by, although that’s not exactly the way they put it. The Tory designate for this duty is Vermilion-Lloydminster MLA Richard Starke, who is tall enough to stand out in a crowd, and the Wildrose designate will be Fort McMurray-Wood Buffalo MLA Tany Yao.

Greg Clark, leader of the Alberta Party and MLA for Calgary-Elbow, told the CBC he had had to give his regrets too, as he had to attend a party board meeting. In his defence, he doesn’t actually expect or even hope to become the premier of Alberta any time soon.

Premier Rachel Notley, through whose Edmonton-Strathcona riding the parade makes it way, will be there with an enthusiastic gaggle of her NDP MLAs, as will newly elected Alberta Liberal Leader David Khan.

In the interests of full disclosure, your blogger – who like Mr. Clark has attended several past Alberta Pride Parades – will not be able to be at Edmonton’s this year either, as he’ll be returning that day from a week-long business meeting in Calgary.

I mention this final point only because their spokespeople suggested they would have liked to have been there, but it’s not too late for Mr. Kenney and Mr. Jean to attend an Alberta Pride parade in 2017. There’s another one in Calgary on Sept. 1.

Year after year, about now, Alberta conservatives shoot themselves in the same foot

One big problem for Alberta’s ‘unite-the-centre’ effort: the NDP already occupies that space

Sunshine, ice cream and a mellow multitude of 10,000 or so usher in the NDP era in Alberta