In the wee hours of yesterday morning, the NDP MLAs in the Alberta Legislature dragged the province’s labour laws into the late 20th Century – with MLAs from the main conservative Opposition parties kicking and screaming every centimetre of the way!

Bill 17, the Fair and Family-friendly Workplaces Act, passed third reading in the Legislature at the end of the June 5 evening session, although it was actually a little after 2 a.m. on June 6 when the voting was finally finished.

The legislation by the government of Premier Rachel Notley is important because it’s been almost 30 years since Alberta updated its labour laws, and the new act brings common practices in other provinces that have worked well for decades into use in Alberta, where labour relations laws in particular had come to be the most backward in the country under successive Progressive Conservative governments.

Changes include the introduction of first-collective-agreement compulsory arbitration, a mechanism for requiring employers to negotiate in good faith with newly unionized employees seeking a first contract, and a provision that means a secret-ballot vote will not be required if at least 65 per cent of the employees in a workplace verify their membership in a union. If between 40 and 65 per cent sign union cards, there must be a vote regardless. 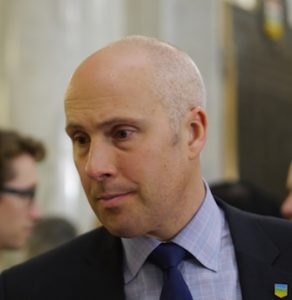 These included an extra week of job protection for maternity leave, to 16 weeks, protected leave for parents to look after sick children, and new requirements to ensure employees are compensated when they work overtime.

But there was little in the bill mandating changes to the Employment Standards Code, which governs non-union workplaces, and the Alberta Labour Relations Act, which sets the rules for unionized worksites, that corporations and conservative parties aren’t already living with quite comfortably in most Canadian provinces.

Even determined conservative partisans like Postmedia’s Lorne Gunter conceded that the NDP’s legislation is far from revolutionary. “For the most part, their proposed amendments to the Employment Standards Code and the Labour Relations Code seem pretty bland,” he wrote in his column on May 25. “The changes the Alberta NDP are proposing are already standard practice at many (most?) Alberta businesses.”

Even the provision allowing a workplace to be certified if more than 65 per cent of the workers agree to be union members is not worth getting excited about, Mr. Gunter accurately advised his readers, “because 65-per-cent-sign-up almost never happens.”

In other words, even a Conservative firebrand like Mr. Gunter was telling his pals in the the Progressive Conservative and Wildrose parties to calm down and not light their hair on fire.

This seemed to have no effect, however, with the Wildrose Opposition in particular introducing amendments that, had they been enacted, would have not only have interfered with the fair collective bargaining process guaranteed by the courts, but in some cases abrogated such fundamental rights as freedom of association guaranteed by the Charter of Rights.

Wildrose amendments, for example, called for an end to the Rand Formula, the standard dues-check-off practice in Canada since the 1940s that ensures no employee will opt out of the union simply to avoid dues yet reap the benefits of collective bargaining; opposed first-collective agreement arbitration; and tried to make it illegal for union supporters to visit potential members’ homes during an organizing drive. When it comes to violating fundamental rights, that last one is pretty much in line with the recent ban on membership in the Jehovah’s Witness church in capitalist Russia!

The NDP did accept a couple of Opposition amendments, which were included in the final version of the law:

Additional amendments proposed by Ms. Gray and passed by the Legislature included clarifying appeal processes for cancellation of work-averaging agreements, adding flexibility to group termination notices, more clearly defining dependent contractors, and excluding physicians from labour relations provisions since they bargain collectively through their own association.

Some of the comments in opposition to this bill by Wildrose and PC MLAs deserve closer attention, and will get it in future posts on AlbertaPolitics.ca.

While the Opposition objections to the bill went over the top at times, observers who were in the House during the debate suggested their hearts weren’t really in it. Indeed, they were agreeable to the 2 o’clock cutoff for debate on Wednesday morning. They were, after all, anxious to get back to their ridings to sell their United Conservative Party merger deal to their skeptical party members.

Wildrose to members: Want to break a law? No problem! We’ll just get elected and change it