Home / Alberta Politics / Ted Byfield’s back, cyber-crusading for Jason Kenney’s bid to lead Alberta back to the Fifties!

Like the proverbial bad penny, Ted Byfield is back.

It should come as no surprise that Mr. Byfield, now 87 and still apparently furious the world has changed, is once again hoping to influence Alberta’s political course.

I suppose Mr. Byfield should be taken seriously. He was and is closely tied to the Harper-Manning-Kenney Axis of Autocracy. He has powerful friends with plenty of money on Alberta’s thoroughly Republicanized right. He holds paleoconservative views that are again becoming respectable, sad to say, in the Age of Donald Trump, Caudillo of the United States.

Mr. Byfield is a talented rhetorician, a devoted propagandist for social conservative causes and a proselytizer of a highly politicized interpretation of the Christian message, which it is said here is not that of the Gospels. Admirably, he keeps at it through tough times: he lost a daughter in 2007, his son Link, in 2015, and his wife Virginia last year. Link and Virginia were both right-wing writers and activists as well.

Mr. Byfield is a skilled and entertaining writer, if inclined to make tendentious arguments.

He is also aided by many acolytes in far-right journalism, which nowadays in Canada is about all there is outside the blogosphere. Many are alumni of publications he founded and ran from the late Sixties through the early Zeroes. They were economic failures but influential just the same. The last survivor, Alberta Report, folded in 2003.

I have no doubt these many Byfield loyalists in journalism will be willing to pitch in with his latest crusade, and I use that term advisedly. As he summed it up recently in in two words in a newly launched blog: Jason and Kenney.

“They identify a man with three tasks – to win the Progressive Conservative leadership, to create a single conservative party, and to drive (the NDP) government from office in the next election,” Mr. Byfield wrote in a post excoriating NDP Education Minister David Eggen for what he imagines to be the liberal conspiracy behind the NDP Government’s extensive review of Alberta’s education curriculum.

Throughout his long career, Mr. Byfield has never had much difficulty spotting sinister progressives lurking and working like rust to destroy civilization as we know it at the drop of a budenovka. Indeed, as a journalist with a strong interest in education – in the Sixties he was one of the founders the justly controversial St. John’s School for boys – he obviously sees classrooms as a particularly promising environment for such subversion.

Other social conservative obsessions shared by Mr. Byfield include LGBTQ rights, women’s reproductive rights, and new-fangled ideas about how to teach arithmetic.

As a result, Mr. Eggen, a social democratic minister of education who recently tried to enforce a law requiring gay-straight alliances in schools where students want them, may have been a natural target for a man with Mr. Byfield’s preoccupations.

It’s fair to say the blogging octogenarian’s style, as illustrated by his attack on Mr. Eggen, is to report facts, but spin them hard as suits his worldview, leaving the impression the target of his ire is up to no good. An occasional shot of sarcasm lends astringency to the blend.

Thus, under the heading, “Self-seen czar of the school system is out to mould a new Alberta,” Mr. Byfield accuses Mr. Eggen of “incomprehensible arrogance” and suggests he was being secretive about not stating the names of the people directly involved in the government’s extensive curriculum reform consultation.

“The minister gave three answers in a row,” Mr. Byfield wrote of a public forum on the review, clearly aiming for the impression Mr. Eggen intended to obfuscate. “First, there are ‘three hundred individuals’ involved in this revision. He could hardly name them all, and anyway some of them might not want to be publicly identified with it. Second, about a minute later: Actually ‘thousands’ of people were involved in it. Third, a minute after that, ‘thirty-two thousand’ people were involved in the revision, says the minister.” (I have taken the liberty of correcting a small typographical error in the original.) 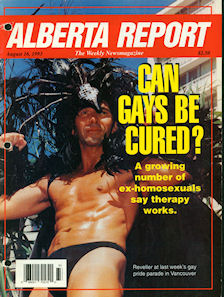 Mr. Eggen may well have said something like this for the simple reason, without the Byfield spin, the numbers reflect the facts. To wit: About 300 people serve on the Alberta Education’s curriculum review panels. Most are teachers, although a significant number come from First Nations and other jurisdictions that use Alberta curriculum. In addition, approximately 32,000 Albertans have filled out the government’s curriculum, survey.

As for Mr. Eggen’s concern about the privacy of the individuals involved, this seems entirely justified on two counts: First, naming them is probably illegal under the privacy legislation the NDP inherited from the Conservative dynasty that ran Alberta for more than four decades. Second, participants in such a review risk being assailed by the unsleeping army of cross-border alt-right trolls that serves the same cause as Mr. Byfield.

As for the astringent sarcasm, Mr. Byfield rather missed the mark this time: “His name is David Eggen. But there’s a problem here. He wants it pronounced Eagen, not Eggen as it’s spelled. This is altogether understandable. Remember he was a teacher for many years. Children, especially boys, can be so cruel – Egghead, Eggnog, Eggen-His-Face, the possibilities are endless. So please. Eggen is Eagen, not Eggen.”

Alas, there is one problem with this bizarre rant – other than that it’s irrelevant to the point Mr. Byfield wants to make. That is, Mr. Eggen pronounces his name Eggen … as in “egg.” (It comes from the Norwegian of Mr. Eggen’s ancestors, by the way, meaning the sharp edge of an axe.) God only knows what those cruel boys made of Byfield!

Speaking of the thin edge of the wedge, Mr. Byfield’s blog was promoted as a Facebook link for parents of home schooled and private schooled children by Parents for Choice in Education, a politicized group that despite its claim to be non-partisan seems to be firmly in the Kenney camp.

Mr. Byfield was there at the start of the Reform Party in 1987, standing with Mr. Manning, son of Social Credit premier Ernest Manning, splitting the Canadian conservative movement asunder.

So there is a kind of illogical consistency in Mr. Byfield’s attack on Mr. Eggen, in that he blames the progressive wing of Alberta’s Progressive Conservative Party, and not the Reform Party wannabes who first bankrolled the Wildrose Party, for creating the division on the right he believes got the NDP elected!

Therefore the Alberta right must be reunited, he concludes, presumably hoping it can be done on terms congenial to Mr. Byfield’s Reform-Wildrose mentality and without a hint of progressivism.

Which leads naturally to this latter-day Jeremiah’s enthusiastic support for Mr. Kenney, the man poised to lead Alberta Forward to the Fifties … when God was still in His heaven and Social Credit still in government in Alberta, the elder Mr. Manning at its head.

For a mild-mannered guy, Stephen Khan’s farewell to the PC leadership race was remarkably blunt

The Week in Review: We know where the Wildrosers are, but where’s Jason?

23 Comments to: Ted Byfield’s back, cyber-crusading for Jason Kenney’s bid to lead Alberta back to the Fifties!