Saskatchewan appears to be suffering from a serious economic malady.

Call it what you will, a new case has now been diagnosed in Manitoba, and conservatives here in Alberta appear to have been afflicted as well – although, thankfully, not our social democratic NDP Government.

As a result, for the time being at least, we will likely be spared the worst symptoms of this tragic condition, which Mr. Sanger noted in correspondence with your blogger is “mainly a disease of affluent older white males, in which the ‘cure’ is inflicted on others, and is far worse than the disease.”

The supposed remedy, akin to the application of leeches in Medieval Europe, takes the form of harsh austerity applied to depressed economies. It “isn’t necessary, and does major damage when it is imposed,” Dr. Krugman has explained in many places, including the comprehensive piece quoted here, written in 2015 for the Guardian.

So the “strange malady” causes its victims (like Saskatchewan Premier Brad Wall and the members of his cabinet, although they were too insignificant for Dr. Krugman to mention by name) to exhibit such symptoms as “extravagant fear and blithe optimism.” 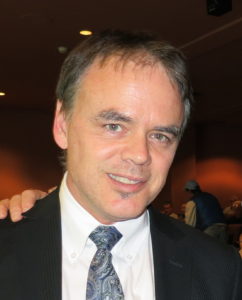 Indeed, both symptoms are on display right now as Mr. Wall and members of his government suffer the vapours at the prospect of a $1-billion deficit while experiencing fevered hallucinations about how attacking the salaries of working people, eliminating public sector jobs and shrinking economic activities by the government will result in a wonderful, market fundamentalist economic utopia.

So, if you were wondering, it’s obviously SADS/Austerity Fever that’s behind the cuts, wage caps and rollbacks for front-line public sector workers like nurses and teachers that were announced by the Saskatchewan Government last week.

“Everything must be on the table” when it comes to the task of rolling back Saskatchewan’s deficit – which, by the way, is about the same size as Alberta’s as a percentage of GDP and would be bigger without that province’s 5-per-cent sales tax – Premier Wall said recently.

“The worst thing we could do for health and education is delay this decision so that in five or six years the problem is compounded so seriously that what some government down the road would have to do would set us back,” he told the CBC at the end of last year, exhibiting the strange mix fear and optimism, both unjustified, that characterizes this condition.

Of course, whether Mr. Wall’s Saskatchewan Party Government actually believes everything its says – which, as Dr. Krugman points out is almost entirely rejected by mainstream economists of all stripes – is another matter entirely.

As Jim Stanford, by coincidence another economist who also happens to be a journalist, explained, this is because “a deficit can actually help the economy recover more quickly from the recession.”

“Perversely, trying to eliminate a cyclical deficit through proactive restraint … only makes the recession worse,” Dr. Stanford wrote in his 2008 book, Economics for Everyone.

In his 2015 Guardian story, Dr. Krugman confidently stated his belief that “the austerian ideology that dominated elite discourse five years ago has collapsed, to the point where hardly anyone still believes it.”

Alas, on this point at least, the author of a twice-weekly economics column in the New York Times was wrong. With the election as President of Donald Trump, widely understood to be an economic ignoramus, the United States looks to be about to suffer a serious relapse of Austerity Fever/SADS.

As for Saskatchewan, the malady has stubbornly resisted treatment.

Just the same, it is worth remembering that, as Dr. Krugman enumerated, “since the global turn to austerity in 2010, every country that introduced significant austerity has seen its economy suffer, with the depth of the suffering closely related to the harshness of the austerity.”

It is reasonable to assume that Saskatchewan in 2017, while hardly a country, will be no different.

Moreover, Dr. Krugman noted, “all of the economic research that allegedly supported the austerity push has been discredited.”

Again, unfortunately, that judgment was made before the phenomenon of alternative facts – and alternative realities – became respectable in the United States.

Of course with the case for austerity pretty well universally discredited as bankrupt, you have to look to the underlying motives of conservatives for persisting with this dogma.

“Conservatives like to use the alleged dangers of debt and deficits as clubs with which to beat the welfare state and justify cuts in benefits,” Dr. Krugman wrote, stating the obvious.

“But won’t this lead to budget deficits?” he asked rhetorically. “Yes, and that’s actually a good thing. … In such an economy the government does everyone a service by running deficits and giving frustrated savers a chance to put their money to work.”

“Counter-intuitively,” agreed Dr. Stanford, who now works in Australia, “a government can maintain a stable debt burden (measured as a share of GDP) while still incurring annual deficits. So long as GDP is growing … quite significant annual deficits can be incurred by governments with no long-run increase in the debt burden.”

Dr. Krugman therefore concluded: “It’s foolish and destructive to worry about deficits when borrowing is very cheap and the funds you borrow would otherwise go to waste.”

One can only hope the major damage about to be done to Saskatchewan’s economy by Mr. Wall’s maladministration happens in time for the results to be evident during the next Alberta election.

With Premier Rachel Notley’s effort to build social license for the province’s resource exports by adopting responsible environmental policies obviously bearing fruit, Albertans should brace themselves for another influx of badly driven cars with green and white license plates in the very near future.

Is a Pink Revolution beginning in America? This genie will be hard to put back in its bottle!

Running a War Room in the age of coronavirus: Nothing much happening right now

Will Alison Redford fire Thomas Lukaszuk? She needs to, but don’t count on it happening!

27 Comments to: Others sure to suffer as Sudden Apocalyptic Deficit Syndrome strikes affluent, older, white males from Saskatchewan