PHOTOS: Bernard the (now-ex) Roughneck enjoys the company of his friends in high places here in Wild Rose Country. Photo grabbed from Facebook. Below: Neal Hancock as Bernard during his Parliamentary Press conference two months ago. Below that: A screenshot of Interim Opposition Leader Rona Ambrose at her Edmonton news conference on Thursday. Ms. Ambrose is, for the moment, ex officio, the nation’s chief Donald Trump Mini-Me. As a historical bonus, James Buchanan.

Mr. Hancock is the young man who appeared at a news conference on Parliament Hill two months ago dressed in blue coveralls and red hardhat, streaks of what appeared to be grease visible on his face, to declare he was “just an average roughneck.” 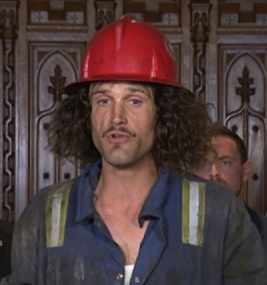 “I’m not a guy from Calgary in a suit. I’m not a guy who’s knowledgeable about public policy or the processes that go on in buildings like this,” Mr. Hancock proclaimed at the event, which was organized by the Canadian Association of Oilwell Drilling Contractors. “I’m a roughneck…”

Mainstream media swooned. Reporters took in the star turn hook, line and sinker. Parliament Hill’s hard-nosed correspondents missed entirely, apparently, the fact that while Mr. Hancock truly had been working as an Alberta roughneck, he also studied politics at university and even had some experience as an actor.

Since then, Mr. Hancock has been showing up at Wildrose Party functions in Alberta to soak up his accolades. “Come see special guest speakers at the Wildrose AGM,” said a recent party Facebook post. “There will be … an address from rig worker and energy advocate Bernard the Roughneck!” Indeed, he appears to be so busy, he’s been able to move on from roughnecking.

Mr. Hancock wasn’t happy to hear from your blogger seeking to confirm rumours about his current employment status on Tuesday while, he said, he was celebrating Donald Trump’s victory in the U.S. presidential election. He accused me of Bernard-trutherism. This is an excellent line and, if you ask me, demonstrates the value of a liberal arts degree from a high-quality institution like Bishop’s University.

Mr. Hancock did offer this, however, to be passed on to readers: “You can tell people that I resigned my position on my rig at the end of October.”

I could have sworn I heard Rona Ambrose, interim federal Conservative leader, bloviating about Donald Trump’s decisive victory over Hillary Clinton or words to that effect during CBC Edmonton’s drive-home program Thursday evening.

Those words aren’t on the 56 seconds of tape the national broadcaster bothered to post on its website after Ms. Ambrose’s flying visit to the Edmonton area that day, but you could hear her say the results of the U.S. presidential election offered “a message for left-of-centre politicians who focus on large policies that are out of touch with regular working people.” You know, like doing something about global climate change.

Actually, as Ms. Ambrose said, the U.S. election results do, rather, send a message, seeing as it is virtually certain Mrs. Clinton will emerge as winner of the popular vote, and some reports say Mr. Trump’s vote is expected to be as much as two million votes behind Mrs. Clinton’s tally when all the ballots have been counted. It’s just not the message Ms. Ambrose wants Prime Minister Justin Trudeau take from last Tuesday night’s developments.

As Canada’s chief Donald Trump Mini-Me for the moment, ex officio, Ms. Ambrose thinks the governing Liberals should adopt the climate-change-denial policy advocated by her party and by President Elect Trump during his campaign.

But the message Mr. Trudeau needs to pay attention to is that it’s time to get on with electoral reform of our undemocratic first-past-the-post voting system as he promised during the 2015 Canadian election campaign.

The U.S. Electoral College, after all, operates much like first-past-the-post. That’s why, twice in as many decades the loser of a U.S. presidential election has been the winner. The previous time, the legal winner was the second-worst president in U.S. history. (James Buchanan is generally thought by historians to have been the worst … so far.) The second time was on Tuesday.

This happens much more often, although thankfully usually less dramatically, in Canada.

Our American cousins can’t easily fix this. We can.

Mr. Trudeau needs to get on with the electoral reform job he promised to do.

Don’t laugh or scream, but Jason Kenney is the Hillary Clinton of Alberta politics