PHOTOS: Dr. Verna Yiu, who was officially named yesterday as the eighth president and CEO of Alberta Health Services in as many years. Below: AHS Board Chair Linda Hughes and Alberta Health Minister Sarah Hoffman.

Sooner or later, you’d think Alberta Health Services would luck out and get a CEO who knows how to run an organization that large and complex – and maybe Verna Yiu the one who can do it.

Dr. Yiu will have to be tough, smart and diplomatic – a heck of a lot tougher, smarter and in particular more diplomatic than the seven CEOs who have preceded her in the eight years since the Tories led by premier Ed Stelmach created the massive organization the wrong way for the wrong reason. 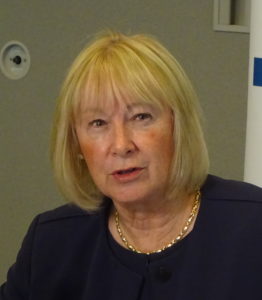 Who knows? For most Albertans Dr. Yiu’s brief appearance at a sparsely attended news conference in downtown Edmonton will be the first they’ve ever heard of her. Still, she gave the impression of someone who may actually be smart, tough and diplomatic enough to pull off this near miracle.

If she does, she’ll earn every free-floating Canadian Loonie in her salary of $573,841 per year. Moreover, it’s unlikely she’ll be loved by everyone if she succeeds at this herculean task, because no one can get any important and difficult job this big done without stepping on some toes, no matter how diplomatic they are.

Consider the previous seven incumbents in the top job at AHS – mostly not a particularly inspiring bunch with the benefit of hindsight, and a couple of real lowlights among them, but maybe that’s just the way the cookie crumbles. At times it’s seemed as if Alberta was running the world’s biggest gong show, as opposed to the nation’s largest health service.

But in fairness to the less-than-magnificent seven CEOs, AHS was not designed to be led by the faint of heart. That’s because Mr. Stelmach and his ministers created a monstrosity when they cobbled together the province-wide health “superboard,” as it was called at the time – a decision that according to Ron Liepert, Mr. Stelmach’s health minister, was made in single afternoon at a cabinet meeting. The goal has long been rumoured to have been to solve the political problems created by aggressive leadership in the Calgary Health Region.

The trouble with AHS is that it’s a reverse Humpty-Dumpty – easy to put together without much foresight or planning, but almost impossible to take apart without wreaking havoc. Anyone who tells you otherwise is surely a simpleton or a liar – and if he’s a liar, he’s almost certainly lying because he wants to create the conditions to encourage U.S.-style privatization of health care. Keep that in mind as we get closer to the next provincial election.

Still, if you ask me, Dr. Yiu, a U of A and Harvard educated pediatric kidney specialist who plans to continue her practice, set the right tone at her introductory news conference. Of course, she had a sense of her potential audience: she’s been acting president and CEO of AHS since the start of the year and has filled other senior positions within the organization.

Dr. Yiu was given a very low-key introduction by Linda Hughes, the former Edmonton Journal publisher who is the chair of the AHS Board, which was put back together by the NDP Government after the Tory Government sacked it in June 2013 for refusing to obey health minister Fred Horne’s highly political orders.

The Tories had their paws all over AHS from Day 1 in May 2008 until the election that brought the NDP to power on May 5 last year. Yesterday, significantly, there wasn’t a politician in sight. Personally, I’ve never seen that before at an AHS news conference, and I’ve been to plenty.

Despite having received more than 70 applications from highly qualified candidates around the world, Ms. Hughes said, “Dr. Yiu was chosen because she is the best person for the job. It’s an added bonus that she is known and respected within AHS and across the province.”

What she left unsaid is that Dr. Yiu is pretty clearly an executive who has the potential to work well with Health Minister Sarah Hoffman, the brightest light in Premier Rachel Notley’s cabinet. They might even make a good team, seeing as both of them are focused on the right things, that is, running the system well and getting good value for the public’s buck.

For her part, never mind the anodyne platitudes attributed to her in the press release, Dr. Yiu diplomatically recognized the good work done by others before she ascended to the executive suite at AHS, but she showed a little steely confidence too, suggesting she’s pretty sure she has the skills to succeed.

She also acknowledged that “we have a government that actually supports the organization and is invested in its stability,” which is certainly true, and pithily reminded the few journalists present at one of the more important news conferences of the past few months that “health care is a team sport.” While she didn’t say so, that team necessarily includes the government, and it’s a rare government that can work in that context.

So, if you ask me, this appointment looks like a shrewd choice, or, actually, the culmination of a series of shrewd choices, that has the potential to benefit Albertans.

Some of our neighbours may not be ready to recognize this yet, but their compatriots picked well when they chose Rachel Notley as premier.

Ms. Notley did too when she put Ms. Hoffman in charge of the health ministry.

Likewise, Ms. Hoffman did well to pick Ms. Hughes to lead the board.

And, no, I have not missed the obvious, that the string of sound personnel decisions up to now – perhaps for the first time in the turbulent history of AHS – was achieved by women … and not by Tories.

It remains to be seen if Ms. Hughes and her selection committee have managed this feat again, but it seems as if it is within the realm of possibility.

Dr. Yiu has agreed to a five-year contract. She has the option to renew. There is so much that can go wrong for so many reasons, but surely it’s about time for something to go right.

Let’s hope it does.

On the War of the WRP, Saskatchewan’s Great Wall and the mysterious appeal of Alberta Health Services

Climate-change denial, bias, and a Marxist under every bed of leaves characterize papers commissioned by energy campaigns inquiry

Not a lot of light between UCP and Alberta Party ‘Ministry of Truth’ schemes, or for that matter the NDP approach

Message to my American Cousins: It’s mellow up here; there is no communist revolution yet; no one wants to take Manhattan

8 Comments to: Dr. Verna Yiu named Alberta Health Services CEO No. 8 in 8 years – can she fix what 7 couldn’t?