Home / Alberta Politics / Watching the Wildrose in the Legislature: Beverly Hillbillies … or Deliverance?

PHOTOS: The Beverly Hillbillies in campaign mode. Actual members of the Alberta Wildrose caucus may not appear exactly as illustrated. Below: Ontario Premier Kathleen Wynne, left, and Alberta Premier Rachel Notley, right, answer reporters’ questions in the Legislature Rotunda yesterday morning (screen shots … can’t say I was there) and, below them, Wildrose Leader Brian Jean and actor Buddy Ebsen, in the role of Jed Clampett.

Hey, if you’re old enough to remember it, as I certainly am, the Beverly Hillbillies was a pretty funny sitcom, running right through the Glorious Sixties. 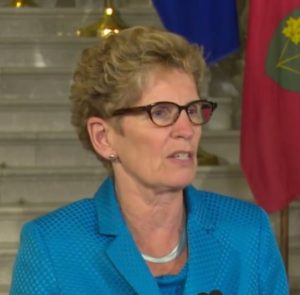 So it’s a temptation to compare the performance of Alberta’s Wildrose Opposition in the Legislature yesterday to the antics Jed Clampett and his clan.

The Wildrosers insulted Ontario’s visiting Liberal Premier Kathleen Wynne, mostly refused to stand when she was introduced to the Assembly, pointedly paid ritual obeisance to conservative bullyboys like Stephen Harper and Brad Wall, and generally acted like somebody’s embarrassing cousins … ours, I guess.

The thing is, as brilliantly portrayed by actor Buddy Ebsen, the man named Jed – a poor mountaineer, barely kept his family fed – innocently exuded a certain kindly decency, which was what made the show appealing enough to stick around for nine seasons.

The denizens of the Wildrose benches in the Legislature yesterday? Not nearly as agreeable, I’m afraid. Just plain old embarrassing, actually – with the emphasis on bubblin’ crude – especially when you realize city folks in Toronto and Ottawa may hear about it today.

I’d say it diminished us all a little – especially the tacky exhibition by Wildrose Finance Critic Derek Fildebrandt, whom Opposition Leader Brian Jean seems utterly unable to control, barking “Invite Premier Wall here! Invite Premier Wall!” at Premier Rachel Notley. (“Tacky” was Transport Minister Brian Mason’s word, but it certainly fits.) Geez, it was like one of those dinners with your family that get so bad your spouse eventually refuses to ever go to another one!

Well, it could’ve been worse … At least no one on the Wildrose benches whipped out a banjo and started playing Yankee Doodle Dandy real fast while squinting at members of the NDP Government, if you know what I mean. Still, I’d advise staying out of canoes and off the Red Eye to Toronto for a couple of days. And don’t pray for Deliverance!

Dean Bennett of the Canadian Press, an excellent reporter willing to report stories that need to be covered, wrote up a pretty good account of the sorry affair that covered the principal low points. Better read it here on CTV’s website, because the chances are slim much of this yarn will show up in the Postmedia Alberta Frankenpaper this morning.

If you’re made of sterner stuff and want to watch it for yourself, be my guest – the tape starts slow but perks up as the ’Rosers start to get worked up. However, you may want to dose up on Pepto-Bismol before you tune in to Wildrose MLA Jason Nixon’s paean to Mr. Harper, “a man of integrity, and history will remember that.” (Senator Michael Duffy, c’mon down!)

Premier Notley, obviously exasperated with the views of the in-laws on the west side of the House, noted that “just today we have had demonstrated to all Albertans very clearly why these folks over there are simply not ready to govern.”

I’ll say! But the really scary thing is that the Wildrosers may think their Donald Trump moment yesterday was a huge success, and a certain Albertans are bound to agree.

Also yesterday, Ms. Wynne and Ms. Notley announced a memorandum of understanding to look for ways to reduce greenhouse gas emissions in the production, transportation and use of natural resources in Alberta and Ontario, accelerate development of renewable energy and energy storage, and find new and innovative uses of carbon dioxide.

All of which presupposes climate change is a problem, which, as I may have forgotten to mention, is a proposition our Wildrose kinfolks may not accept.

Those wacky federal Tories! Just how dumb do they think we are? (Hint: plenty)

Is rural crime actually getting worse in Alberta? What we know and what we don’t

Go figure! Ezra Levant, the Pied Piper of right-wing-nuttery, has the mainstream media singing his tune!

25 Comments to: Watching the Wildrose in the Legislature: Beverly Hillbillies … or Deliverance?