Ho-hum. The misnamed Canadian Taxpayers Federation was getting the usual uncritical ink from mainstream media Thursday and yesterday for its mischievous claim Alberta’s public and Catholic schoolteachers should have their pay rolled back.

There’s not a lot of percentage in arguing with the CTF – which really ought to be known as the Canadian Anti-Union Federation or the Canadian Anti-Public-Services Federation, except that it’s not really a federation and we don’t actually know if it is financed by Canadians since the financial records of this big transparency advocate are secret.

As has been said here before so many times it gets tiresome having to repeat it, the CTF is a classic “Astro-Turf” organization – that is, a group that masquerades as a representative of grassroots Canadian taxpayers but in fact supports the Big Businesses agenda in its entirety. It gets attention with stunts that are irresistible to lazy journalists.

The CTF says it has 84,000 supporters, which might be true but is completely unverifiable. It admitted a couple of years ago that its only actual members are the members of its board, which at the moment numbers five. So it is in reality a five-member organization.

It is preposterous to call this group, as the CTF claims, a “citizens’ advocacy group.”

One of its five members, Adam Daifallah, is reported to be a spokesperson for the family of Conrad Black.

One of them, Karen Selick, is the litigation director of an organization of right-wing lawyers that argues “Canada’s labour laws have no place in a free society” and calls the right to bargain collectively recognized by Canada’s courts “preposterous.”

One of them, John Mortimer, runs another organization that advises corporations on how to keep unions out. Mr. Mortimer frequently gives speeches in which he advocates Cotton-Belt-style right-to-work laws and attacks Canadian unions. 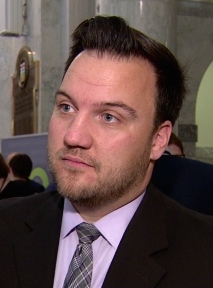 The CTF is tightly linked through interlocking directorships to a network of other right-wing political groups that share the CTF’s general corporate agenda. By that term, as I once told CTF President and CEO Troy Lanagan when he challenged me to define “corporate agenda,” I mean advocacy of a corporate and personal tax structure that benefits corporations and not citizens, and much more as well.

When the CTF’s current Alberta spokesperson calls for a rollback on teacher salaries, it’s not unreasonable to conclude the organization’s operatives are intentionally being outrageous in hopes of goading someone in the teachers’ union into saying something inflammatory that can then be used against these public servants.

The previous CTF spokesperson in this province, Derek Fildebrandt, is now the Wildrose Party’s finance critic. This is one of many illustrations of how tight the ties are between this organization and right-wing political parties throughout Canada.

The CTF’s argument in this case, such as it is, is that Alberta teachers make more than teachers in other provinces just now, and therefore deserve to be busted back so that someone else is first. If that happened, of course, the chapter of the CTF in that province would make the same attack on teachers there, completely in line with the group’s policy of undermining public services and attacking unionized workers to encourage a race to the bottom that benefits only the tiny minority at the top.

That said, other issues taken on directly by the CTF include opposition to defined-benefit pension plans for working Canadians, opposition to money spent on firearms control and tobacco reduction programs (typically on grounds of efficiency), support for “transparency” policies that invade the privacy of individual citizens if they happen to work for groups of which the CTF disapproves, ad hominem attacks on young Canadian scholars who receive grants for research that does not have an obvious immediate application for corporations, and opposition to any spending on the arts.

I refer to this latest anti-teacher stunt as mischievous, because it allows the CTF to fulfill an obviously partisan objective of attacking the Alberta NDP and supporting conservative parties at the same time as it tries to undermine public sector unions in the minds of the public.

A spokesperson for the Alberta Teachers Association tried to respond with a factual argument to the CTF’s mischief, which is surely a waste of time, although I suppose the effort must be made.

“I don’t really understand why the Canadian Taxpayers Association is singling out teachers,” Jonathan Teghtmeyer told the CBC. “The fact is Albertans make more than their counterparts across the country, regardless of the line of work that they’re in.” Although he didn’t mention it, that would be because Alberta is one of the more expensive parts of the country in which to live. Of course, if low oil prices persist, the market will probably take care of this particular “Alberta advantage.”

Well, I suspect Mr. Teghtmeyer does know what the CTF is up to, and that he’s just being diplomatic. Regardless, he need not worry. The CTF isn’t really just singling out unionized teachers. They don’t like unionized nurses either, or unionized firefighters, or unionized anything else except maybe lawyers and doctors. That’s why they’re financed by … whomever it is that pays their bills.

That’s presumably also why they’re also calling on the NDP government to break its contracts with other unions – something even conservative parties won’t do.

The bottom line? The CTF is not a serious organization. Why does the media keep treating it as if it is?

OK, maybe B.C. has a case against Alberta’s wine embargo … but so what?

Shark Jumping in Alberta: NDP and UCP strive to outdo each other with ridiculous statements

Grits in Ottawa and Dippers in Edmonton: far from the worst combination for keeping Alberta’s economy in motion

26 Comments to: What’s behind ‘Canadian Taxpayers’ Federation’ campaigns like its stunt calling for rollbacks in Alberta teachers’ pay?