Today is International Women’s Day, and it’s more than a little disheartening to learn on this date that Alberta continues to have the largest gender income gap in Canada.

From a common sense perspective, the difference revealed in the Parkland Institute study released yesterday is so huge that it gives the lie to all the convenient tales we tell ourselves and are told by the corporate right’s propaganda engine about how this is all just the result of choices made by women.

Job tenure, choosing to settle for low-wage work, failing to register for computer science courses at university and all the other excuses repeated constantly by the neoliberal echo chamber don’t hold up very well as an explanation when the gender wage gap in this province surpasses 50 per cent.

The study by Queen’s University law professor Kathleen Lahey – Equal Worth: Designing effective pay equity laws for Alberta – makes depressing reading when you consider that not only will Alberta women’s average market incomes in 2016 be less than half of men’s, but that even women working full-time, full-year in the province will earn $31,100 less on average than their male counterparts.

“Even after accounting for redistribution from tax and transfer payments, women in the province will have after-tax incomes of just 60 per cent of men’s,” says the Parkland Institute press release introducing Prof. Lahey’s study.

“Alberta men will have earned as much by Canada Day as it will take women in the province the entire year to make,” Dr. Lahey observed.

And right now, as we bob along in the wake of Canada’s recent neoliberal history, it continues to get worse.

Dr. Lahey argued that the experience of other jurisdictions makes it clear that robust pay equity legislation that ensures women receive equal pay for work of equal worth – not just the same pay for same work – is a key element in policy changes needed to reduce such inequalities in this province.

“The good news, particularly during challenging economic times, is that pay equity laws would actually improve the government’s balance sheet,” she said. How much? “Between $769 million and $1.2 billion in a single year with relatively modest increases to women’s wages – because of increased tax revenue and decreased need for income support from governments.” (Emphasis added.) 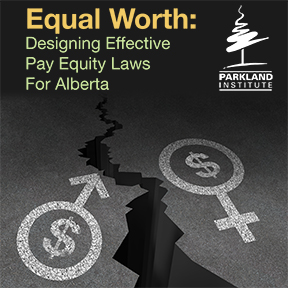 This should be pretty obvious, which is why it doubtless makes teeth grind in corporate circles that would far rather see us adopt solutions to women’s inequality and poverty that are financed by taxpayers and not through fair pay. When they win that battle, of course, the next demand will be for even lower taxes.

So it is a hopeful sign – if not necessarily a guarantee of progress – that yesterday also saw the announcement by Premier Rachel Notley and Status of Women Minister Stephanie McLean of a long-term plan to improve gender equality in Alberta that includes increasing women’s economic security.

“Women who feel safe and have equitable access to capital and networking are vital to a strong and resilient economy,” said the government’s news release, speaking a profound truth. “A 20-per-cent revenue growth among women-led businesses would represent $2 billion a year to Alberta’s GDP,” it noted, paralleling Dr. Lahey’s point about tax revenue.

It is true, as the government statement points out, that the Alberta NDP is now “leading by example with the first gender balanced cabinet in Canadian history,” and with other powerfully symbolic changes like making the Legislature a more family-friendly place. Indeed, Ms. McLean will make history this afternoon when she brings her month-old baby, Patrick, the Throne Speech.

But for this to have meaning, it will have to be moved out of the halls of the Legislature and into the places where Albertan women and men work. And to do that, to be realistic, will take legislative action.

What’s more, a long-term plan is not the answer when change is needed now.

As Prof. Lahey observed: “Pay equity legislation can’t address all the barriers women face, but without it there is simply no way to meaningfully start to narrow this troubling gap.”

Brian Jean makes it clear, any new Alberta conservative party will be the Wildrose Party