Home / Alberta Politics / Now that CAPP’s president has called for quick energy royalty review, Wildrose and PC leaders can be expected to fall into line

While Alberta’s New Democratic Party government has been pushing ahead with its plan to review the royalties paid by the energy industry, widely thought to be among the lowest on the planet, the province’s two conservative opposition parties have been screaming for the review to be shelved.

The royalty review is “dangerous,” protested Wildrose Opposition Leader Brian Jean, accusing Premier Rachel Notley of “putting ideology above good government,” which is a bit of a chuckle considering who leads the most ideologically driven political party in this province.

“They’re doing everything in their power to put business out of business,” screeched Progressive Conservative interim Leader Ric McIver, rolling in a complaint about the NDP’s modest increase in the province’s business tax to a still-low 12 per cent and accusing Ms. Notley of tailoring her party’s policies to the campaign needs of federal NDP Leader Thomas Mulcair, whom Mr. McIver insultingly refers to as the premier’s “boss.”

The always-supportive Edmonton Sun hyperventilated in a headline on an editorial that “Alberta is on a cliff,” and begged, “don’t push it off with royalty review.”

All this is about to change, however, now that Mr. Jean’s and Mr. McIver’s boss at the Canadian Association of Petroleum Producers has spoken up and told the two of them, in effect, to shut the [BLANK] up.

On the contrary, Mr. McMillan said, with the price of oil dipping below $40 per barrel this week, it’s time to get on with the review as quickly as possible – not that the Alberta oil industry will ever be very interested in actually paying higher royalties like those that used to exist in Alberta when Ralph Klein came to power.

The reason for this should have been pretty obvious to anyone who was paying attention, which the leaders of Alberta’s two opposition conservative parties clearly weren’t. That’s because, from the perspective of the oil industry, there could hardly be a better time for a review of energy royalties than when oil prices are already in the toilet and heading for the sewer pipe!

Indeed, it would be a wonderment if the top dogs in the energy industry aren’t on their knees thanking whatever deity they worship that the NDP got elected when it did on a promise to review royalties. After all, they are people who, unlike the Wildrose and PC leaders, actually do pay attention to what’s going on around them.

And we are living at a moment in history when it would be hard to make a stronger argument made for keeping royalties pretty much where they are.

Moreover, those energy industry top dogs are not without political savvy of their own, so they also understand that once the rates are set, the NDP is unlikely to want to revisit the question for a long, long time.

Imagine what might have happened if oil were still trading where it was a year ago! Wouldn’t that strengthen the calls from NDP supporters for higher royalties, implemented faster, than the present situation, which is likely temporary given the world’s balance of petroleum supply and demand?

This realization almost certainly accounts for the moderate language used by Mr. McMillan, who is obviously no dummy, to describe the NDP’s planned review, which will be headed by ATB Financial President Dave Mowat. Mr. Mowat was appointed in late June by Alberta Energy Minister Marg McCuaig-Boyd. The full panel is expected to be named by the government any day now.

Mr. McMillan, a former Saskatchewan Party energy minister who presumably knows a thing or two about politics himself, assured the Herald’s Editorial Board yesterday that the industry understands the New Democrats have a strong mandate to review royalties and encourages them to get on with it.

Word is bound to quickly filter down to the Sun’s and other Postmedia editorial boards that they should tone down their hysteria about the royalty review now that the Herald has its marching orders. Likewise, even if it’s just the teensiest bit unfair to call Mr. McMillan the Opposition leaders’ boss, we can nevertheless expect the Wildrose and PC leaders to quickly zip their lips about how the royalty review must, simply must, be stopped.

In fact, if this had happened slightly sooner – say, if former Progressive Conservative leader Jim Prentice had asked energy companies to pay, in Ms. Notley’s phrase, “just a little bit more” – Mr. McIver’s party might well still be the government of Alberta!

And if the former PC government had really been paying attention, they would have let another premier, Ed Stelmach, proceed with his proposed royalty increases back in 2007.

Mr. Stelmach, it can be argued persuasively with the benefit of 20/20 hindsight, pretty much got it right.

Speaking of irritating and hypocritical comments from Alberta’s opposition parties as they campaign openly for the re-election of Stephen Harper’s Conservative Party of Canada, there was Wildrose Leader Brian Jean’s news release yesterday condemning Labour Minister Lori Sigurdson for campaigning in British Columbia Monday for a federal NDP candidate. 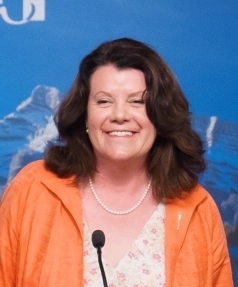 “The summer vacation is over, Albertans need leaders who are focused on jobs and growth,” Mr. Jean huffed self-righteously, throwing in a complaint about the NDP royalty review that, as noted above, may earn him a cranky call from CAPP.

Meanwhile, Mr. Jean has been out on the road himself, touring the province and, according to his frequent news releases, meeting with Albertans and talking about their concerns.

But, um, by the sound of local press reports from the hinterland, which as the leader of a rural-based party Mr. Jean may assume city slickers never read, he’s also been doing no little campaigning for you-know who. “We have a big job there,” Mr. Jean told residents of Pincher Creek according to the Pincher Creek Echo, “and Stephen Harper is the only one capable of doing it.”

Meanwhile, down the road in Lethbridge, the touring former Conservative MP told folks how he’s been hearing support for the federal Conservatives wherever he goes, stating, “Stephen Harper is the best prime minister we’ve ever had.”

And while Mr. Jean blames the NDP for many of the fiscal problems now bedevilling Alberta, despite their having been in power for less than four months, he’s happy to deny Canada is in recession, also by way of supporting Mr. Harper.

“He didn’t agree the country is in a recession and supported Harper for the upcoming federal election,” the Review went on, quoting Mr. Jean explaining, “I am hoping that he (Harper) gets to continue on because we have a very fragile global economy and we need a steady hand.”

Surely what’s good for the goose is good for the gander! Shouldn’t Mr. Jean be sticking to his knitting as Alberta’s Opposition leader and be focusing on jobs and growth, instead of stumping for politician whose risky neoliberal ideological experiments have already hurt the Canadian economy?

These posts also appears on Rabble.ca.

Victory Day in Moscow: some thoughts about the wisdom of messing with Russia

2 Comments to: Now that CAPP’s president has called for quick energy royalty review, Wildrose and PC leaders can be expected to fall into line