Home / Alberta Politics / If the post-Smith Wildrose Party’s really in a position to win a majority, this campaign will turn ugly fast

PHOTOS: A dust storm blows through Edmonton Saturday … or was that the Forum Research poll? (Mack D. Male photo, grabbed from Twitter.) Below: Pollster Lorne Bozinoff and Pastor Allan Hunsperger.

With a new poll, however fanciful, projecting a Wildrose majority in the May 5 Alberta election, it seems pretty certain Alberta’s election campaign is going to turn ugly fast.

Maybe it was the results of the Forum Research demon-dialler poll of 1,661 eligible voters that blew into Edmonton yesterday on a mile-high cloud of dust worthy of Baghdad on a windy day! 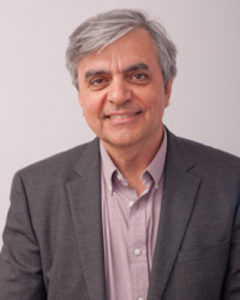 Regardless, let’s speculate about the meaning of that particular poll, which was in the field from Tuesday to Thursday last week, shall we?

The survey – which by the sound of it, even its own pollster is having a little trouble quite believing – puts the governing Progressive Conservatives led by Premier Jim Prentice, the further-right Wildrose Party led by Brian Jean, and the centre-left Alberta New Democrats led by Rachel Notley in a virtual three-way heat, each with about 30 per cent of respondents’ support.

According to the Edmonton Journal, however, Forum Research head honcho Lorne Bozinoff reckons that this gives the edge in winnable seats right now to the Wildrose Party.

Although Dr. Bozinoff was too polite to put it this way, this is because Alberta ridings are gerrymandered to give rural voters the edge, something that’s persisted for years because it normally works for the PC Dynasty that’s run the place for four and a half decades.

If the election were held tomorrow, instead of on May 5 as planned, these results would give the Wildrose Party 44 of the 87 seats in the Legislature, the PCs 23, the NDP 15 and the Liberals five, Dr. Bozinoff concluded.

Of course, he cautiously observed, “the fact that Wildrose leads now doesn’t mean they will prevail on election day,” adding that “the most interesting finding here is the strong performance of the Alberta NDP.” Both these statements are true, in your blogger’s estimation.

Of course, it pays to remember, we’ve been here before with Dr. Bozinoff. Just the same, let’s assume for the moment this poll has nailed it – at least as things stand today – and ponder what that might mean about what happens next.

The first thing to consider is the strong possibility that Danielle Smith, the former leader of the Wildrose Party, is feeling pretty blue right now – and not Tory Blue, either. My guess is that the politically disgraced and soon-to-be-unemployed Ms. Smith – whom the Tories allowed to be skidded as a candidate for re-election almost as soon as she’d switched to their colours – will be wishing this morning she were a Wildroser still.

She may pine for her days as Opposition leader almost as strongly as former federal Liberal and Ontario NDP premier Bob Rae must have wished he were still a New Democrat on the day Thomas Mulcair took over for Jack Layton as the Leader of the Opposition in Ottawa!

Neither Ms. Smith nor Mr. Rae would admit to any such thing, of course, but … c’mon!

It may not have been her intent when she led the majority of her caucus across the floor to join Premier Prentice’s PCs, but it sure starts to look as if by doing so she contributed to the circumstances that have put her former party back into a position it could win this time. And whatever must Preston Manning, the man who supposedly brokered the floor-crossing deal for the good of conservative solidarity, be thinking now?

The problem for Albertans with that scenario, of course, is that by the standards of the loony right in Alberta, and for all her lack of strategic common sense, Ms. Smith was pretty sensible. Mr. Jean? Who knows? Which brings us to the second part of this speculation.

Mr. Prentice, Ms. Notley and the political parties they lead are known quantities. Love ’em or hate ’em, if you’ve been paying any attention at all, you know basically where they stand, and what their parties would likely do in office. The PCs are farther to the right than NDP’s leadership is to the left nowadays, but both are parties of the centre.

During a decade in the House of Commons, Mr. Jean managed to fly mostly below the radar. There are some hints about what he really thinks, but until circumstances propelled him into the leadership of the Wildrose Party, nobody paid much attention to the guy.

He’s now running in the provincial Fort McMurray-Conklin riding, which includes some of the same territory.

If Mr. Prentice’s PCs have really found themselves in a corner, you can expect them to start to play with their elbows up – and that means very soon we’ll all likely learn quite a lot about Mr. Jean.

Leastways, if the Tories’ private polls say the same thing as yesterday’s Forum survey, I would bet they’ll make a strategic decision to go hard after the Wildrose Party and take it easy on the New Democrats, for the time being at least.

After all, in politics as in war, it pays to concentrate your fire. And the Wildrosers appear to be the principal threat today to the Tories.

With a list of candidates cobbled together by a new leader at the last minute after the party’s veteran players defected to the other side, you have to suspect that there are some potential new lakes of fire out there smouldering, waiting for PC strategists to exploit.

One of the biggest may be Mr. Jean himself, about whom so little is known by voters – an assertion supported by the Forum poll’s conclusions.

The first rock the PCs will look under, I’d guess, is Mr. Jean’s social conservative credentials. And you don’t have to dig very deep to start finding potential problems for the new leader and his party. For starters, there’s his position on abortion rights.

There’s a reason Prime Minister Stephen Harper didn’t want his federal Conservative Party’s anti-abortion caucus raising that particular issue, so it’s interesting that this was the only policy on which Mr. Jean ever broke ranks with his party during his decade in Parliament.

That happened when he voted in favour of the failed attempt to have Parliament reconsider the legal definition of a fetus, part of a sly effort to re-criminalize abortion.

Indeed, Mr. Jean received the endorsement of Campaign Life, a large and active anti-abortion coalition, for what it considers an almost perfect Parliamentary voting record.

That record also included voting against legalization of same-sex marriage in 2005, arguing perversely that extending the institution beyond one man and one woman would infringe the religious rights of Canadians who oppose such marriages on faith grounds.

Mr. Jean also advocated withdrawal from the Kyoto Accord, although that’s hardly something Alberta’s PCs will feel comfortable going after him over. And he excoriated public service unions, accusing members of the Canadian Union of Public Employees, of which he said he was once a member, of making a slogan of “hide and seek for a grand a week.”

Premier Prentice has already tried to blow off both the NDP and the Wildrose Party as extremists, and while there’s precious little evidence for this in the case of Alberta’s increasingly centrist New Democrats, it seems the PCs may have something to work with in the case of the new Wildrose leader.

This stuff may not quite add up to Pastor Allan Hunsperger’s Lake of Fire theological speculations when he was a Wildrose candidate in 2012, but if need be it will give the Tories something to use their $5-million-plus campaign war chest to work on – as I expect they will.

One thing we can be confident they won’t use on either opposition leader, though, is the popular distrust of the legal profession. Mr. Prentice, Ms. Notley and Mr. Jean have this much in common: they’re all lawyers.

If hard words aren’t spoken soon, the only reasonable conclusion is that the PCs’ in-house polling is telling them something different.

Has the world turned, or are the polls just wrong again? Why the punditocracy is fussing

The medium is the message: Rachel Notley calls an election for April 16

Happy Canada Day: Alberta has an extra billion, which was good luck for the NDP

Canada’s Conservatives have taken their greatest strength and bulldozed it to the ground: this will not end well for them

Alberta’s Bill 27 may not take the politics out of pensions, but it will certainly help

16 Comments to: If the post-Smith Wildrose Party’s really in a position to win a majority, this campaign will turn ugly fast