PHOTOS: Déjà vu all over again – the Alberta Legislative Building back in the day. Below: Retired Judge John Major, Winston Churchill and the ever-quotable Yogi Berra.

Alberta Premier Jim Prentice’s “5-Per-Cent Solution” announced yesterday, whereby political salaries are symbolically trimmed to help justify other unpopular cuts in public services and an across-the-board attack on the salaries of the public employees who deliver them, is bad policy, but irresistibly good politics.

With an election looming, no working politician wants to be the one who states the obvious, that political work is important work and the people who practice it, no matter what their political persuasion may be, deserve to be sensibly but not excessively compensated for their efforts. 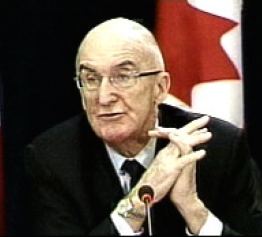 This fear is justified because the ever-diminishing percentage of Alberta citizens who actually vote can be counted on to suffer from a near-permanent state of policy amnesia.

So while most politicians will privately agree the question of how much they get paid needs to be systematized and separated by the length of an arm or more from their own deliberations, few can summon the foolhardy courage to state the obvious when a manipulator like Mr. Prentice is spinning this nonsense to set the stage for a fight with modestly paid public employees.

As with almost everything about this latest convenient and temporary dip in the price of oil – which has conservatives of all stripes quoting Winston Churchill about the desirability of never letting a good crisis go to waste – we have been here and done that before with decidedly mixed results.

Ralph Klein rolled back cabinet salaries by 5 per cent in 1993 to start the ball rolling on his efforts to justify attacks on public sector services, especially health care. (Although not the pay of provincial court judges, as it turned out, who to the premier’s annoyance were able to persuade a higher court that such a cut would interfere with their judicial independence.) Mr. Klein also rolled back MLAs’ pensions by replacing their pension plan with payouts upon departure.

Ultimately, this led to the “Kleintastrophe,” from which health care in Alberta in particular is still recovering, but that will have to be the topic for another day, probably soon.

The result of Mr. Klein’s temporarily irresistible symbolism was that, immediately after winning the 2008 election, members of the cabinet of premier Ed Stelmach gave themselves significant pay increases of about 30 per cent.

Mr. Stelmach argued, rather bravely given the nipping and yipping at his heels from the usual suspects, that Alberta’s politicians hadn’t had a raise in 15 years and the extra money was needed to attract qualified people.

None of this would have been necessary, of course, if governments in Alberta possessed the management skills to plan for the inevitable ups and downs of a resource-based economy. Alas, our Conservative governments never fail to be taken by surprise by the fact that petroleum prices go up and down.

The next premier to try to deal with that was Alison Redford, who had the sensible notion of appointing an impartial person (a retired judge with the same name as a Conservative British prime minister as it turned out) to find a way to set politicians’ salaries without tears.

Alas, retired Supreme Court justice John Major’s report in May 2012, while making an enormous amount of sense, recommended a salary increase for the premier too big to be politically palatable and Ms. Redford soon succumbed to the temptation to fiddle with his prescriptions.

Mr. Major had reasonably enough recommended the reintroduction of a pension plan for the politicians and an end to the lucrative committee pay by which Alberta MLAs sneakily added to their salaries without, they hoped, offending voters.

He also called for political salaries to be reviewed and set every three years by a panel of provincial court judges, instead of by the politicians who benefit themselves.

But his suggestion that a premier (not any particular premier) should be paid about the same as a judge – more than $300,000 – was too much for Ms. Redford in the political context of the day. Ditto the pension proposal.

She didn’t, although basic MLA pay was raised in 2013 under a simplified system to just over $134,000 a year, with higher rates for cabinet members and a few other legislative jobs. Late in the year, an increase in RRSPs raised total combined annual compensation for MLAs to $156,000.

This compared with a base salary a hair over $78,000 in 2008, a percentage increase of about 72 per cent in base salaries, although the percentage would be lower than that with the pre-2013 committee pay received by many MLAs added in. The premier’s pay rose about 37 per cent in the same period, if my late-night back-of-the-envelope calculations are accurate, always a risky assumption.

Regardless, these are, it is said here, appropriate salaries given the importance and nature of the work MLAs do.

MLA pay was then symbolically “frozen” for three years in 2013 as the Redford Government tried to force civil servants to take a pay freeze – although without the big raise cabinet and MLAs got just before it. Ultimately, this campaign failed an agreements were negotiated and signed containing modest pay increases.

Perhaps if Ms. Redford had possessed 20-20 foresight about her fate, she would have implemented Mr. Major’s full recommended pay policy changes anyway and suffered the slings and arrows of the Canadian outrage industry to leave us with a better system.

Instead, we’re experiencing, as the pundit-like Yogi Berra famously explained, déjà vu all over again.

St. Albert Mayor Nolan Crouse says no to a run for the Alberta Liberal leadership

Fractured fairy tales: Jim Prentice consults his magic mirror and the peasants are not amused!

Short-term jobs and profits notwithstanding, Canada’s interests are not served by Saudi armoured vehicle sale

Where’s the crisis austerity is supposed to fix? Not necessarily in the numbers the government’s consultant crunched